Young Teachers Collective welcomes reflections rooted in local experience from across the globe. This is first part of Derecho en Toma, Daniel Bergerson’s series about the Chilean student movement that is reclaiming the right to education. In this series, Daniel shares research from his year in Santiago, publishes interviews with a new generation of radical teachers, and connects the dots between education in Chile and the United States.

For now, we will kick off the series with a photo essay documenting the amazing work of muralists, graphic designers, and graffiti artists who contribute their craft to the Chilean student movement.

“The changes shouldn’t remain promises. We are going to transform education. National march in all of Chile.”

Art vs. Ads: Resistance to Education Privatization in Santiago, Chile

Education is Chile’s number one conflict, and the writing is on the wall. 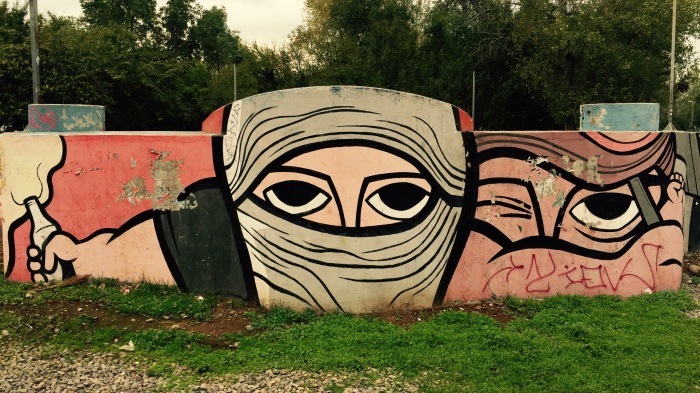 Encapuchado, a masked protestor with Molotov and banner in hand

“41 years from the coup, those who resisted the dictatorship live in those who fight.”

For the past ten years in Chile, young people have been leading the fight to restore education as a social right guaranteed by the state rather than a commodity bought and sold on the market. From university buildings to bathroom stalls, popular art connects the collective memory of resistance to the dictatorship with the ongoing student movement.

Meanwhile, advertisements for private colleges and test prep services stare down from billboards and bus stops, reminding passersby that there ain’t no such thing as a free education. 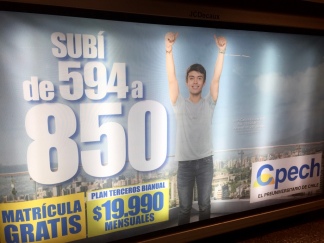 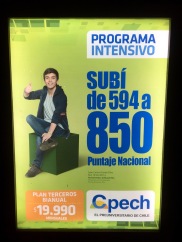 Many statistics demonstrate the extent of privatization in Chile: 54.6 percent of students attend a charter-like school, 42.1 percent of household spending is dedicated to education, only 15 percent of all spending on higher education comes from public sources, compared with an OECD average of 69 percent. But nothing says “education market” like a model awkwardly posing on top of a skyscraper, declaring he boosted his test score (for a small fee), and so could you.

Like the SAT, ACT, and AP tests in the United States, the PSU is the gatekeeper to higher education in Chile. In fact, other than income, it is the only criterion for admission. But considering test scores closely correlate with income, a high socioeconomic class is really the best predictor of admission to a university.

“Points do not equal quality.”

“From the classroom to the class struggle.”

Stateside, “more than a score” is the anti-standardized testing rallying cry. In the streets of Santiago, students chant, “Points do not equal quality,” and stencil their message on any available surface. Quality, not equality, has been the system’s priority since General Augusto Pinochet assassinated the democratically elected socialist President Salvador Allende in 1973 and installed an ultra-conservative military dictatorship that reigned until 1990.

Now the rich receive reduced tuition for professional studies at public universities while the poor pay for technical degrees at sometimes-accredited institutes. When public subsidies are going mostly to middle- and upper-class students, the struggle for free higher education is a class struggle.

Advertisements for higher education often reinforce the employability narrative, meaning they paint a picture in which schools are for nothing but skill-building. This anti-philosophy of education is increasingly powerful in many countries, but it also reflects the particularly brutal job market in Chile, where workers have some of the longest hours and lowest wages in the world.

The Chilean left also has a history of promoting vocational education, but it views workers not as employees locked in competition against one another but as laborers who collectively struggle under capitalism. A popular mural in Santiago’s cultural center depicts a worker, a student, and an indigenous leader marching shoulder-to-shoulder in solidarity. 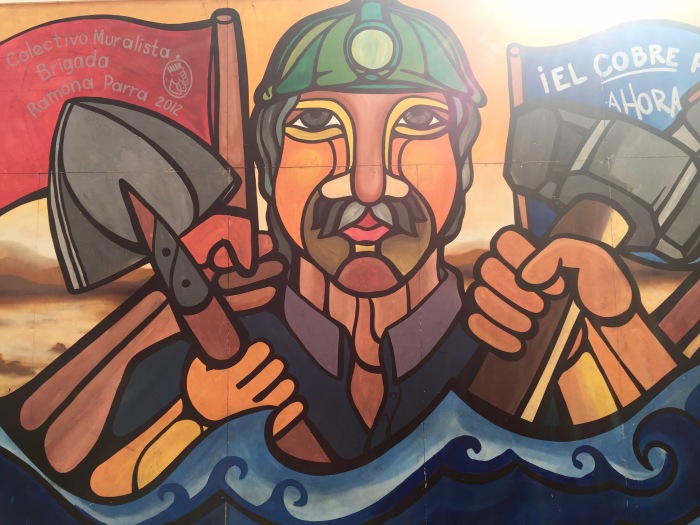 In recent years, the student movement has brought this mural to life. Indigenous communities and trade unions supported the students’ demands for free, high-quality public education. In doing so, the majority of Chilean society coalesced into a national movement to strike down Pinochet’s 1980 constitution, which had privatized social services, slashed collective bargaining rights, and criminalized indigenous activism.

The participatory drafting of a new constitution is already underway, but the neoliberal ideology imposed with the force of a military dictatorship cannot be erased with the flick of a wrist. Individualism, competition, and consumerism still govern Chile, so it is all too easy to believe billboards when they say that school is nothing but a factory for your talents.

“The best brands await you at the talent factory.”

Students have countered this mechanical view of education with a more democratic, sometimes anarchist vision for schools. Murals at the University of Chile recount the story of how secondary students ceased to be cogs in the machine by occupying their high schools, making decisions as a popular assembly, and practicing self-education.

“We will resist by taking over.”

This method of protest is called a toma, which means a “taking.” Students physically take back their school from the hands of authoritarian adults and thereby reclaim their right to education.

In 2006, secondary students occupied their schools in protest of the inadequate infrastructure and extreme segregation brought on by Chile’s free-market approach to education. This came to be known as the Penguin Revolution because high school students wore black-and-white uniforms as they marched en masse through the capital.

“Ten years after the Penguin Revolution, the fight goes on.”

In 2011, some of those “penguins” who were now in university demanded free higher education, so the student movement expanded not only its scale but also its purpose. At its peak, there were over 700 simultaneous tomas of high schools, and spontaneous rallies in Santiago’s central plaza were pan de cada día, which is to say, almost daily. 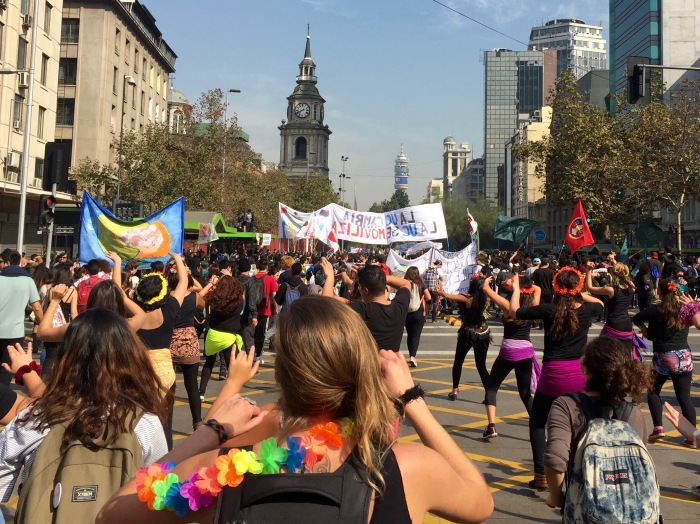 In 2016, the student movement has escalated once again. Though focused on the inadequacies of President Michelle Bachelet’s failure to provide free higher education, student activism continues incorporate demands from various identity groups. Protest signs, campus flyers, and occupation banners not only call for school finance reform but also indigenous rights and anti-sexist education.

“Feminist week: Toward the national assembly of women and sexual diversity.”

To the critical students in Chile — and many are critical indeed — the school system is a capitalist tool to reproduce inequality. If you had only looked at the advertisements, however, you would think education is the salvation of the working poor.

Slogans protected by shiny glass displays claim that a college degree is a ticket to a new life, even in a country with close to the highest income inequality in the world. Popular mythology in the United States, which is similarly home to chart-topping rates of inequality, also treats public education as “the great equalizer,” despite almost two hundred years of evidence to the contrary.

“85 percent employability at 12 months after graduation.” 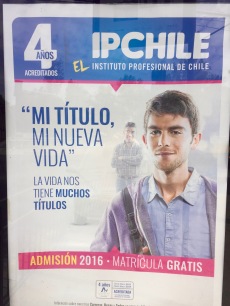 At the heart of the Chilean education conflict are the concepts of freedom and rights. Is freedom a carrot to dangle in front of students competing for capital? Or is freedom an inborn trait to be protected by the state via the redistribution of resources? What is more important: a student’s right to public education or an entrepreneur’s liberty to operate private schools? Should the constitution recognize “el derecho a educación” or “la libertad de enseñanza”? Can it do both? 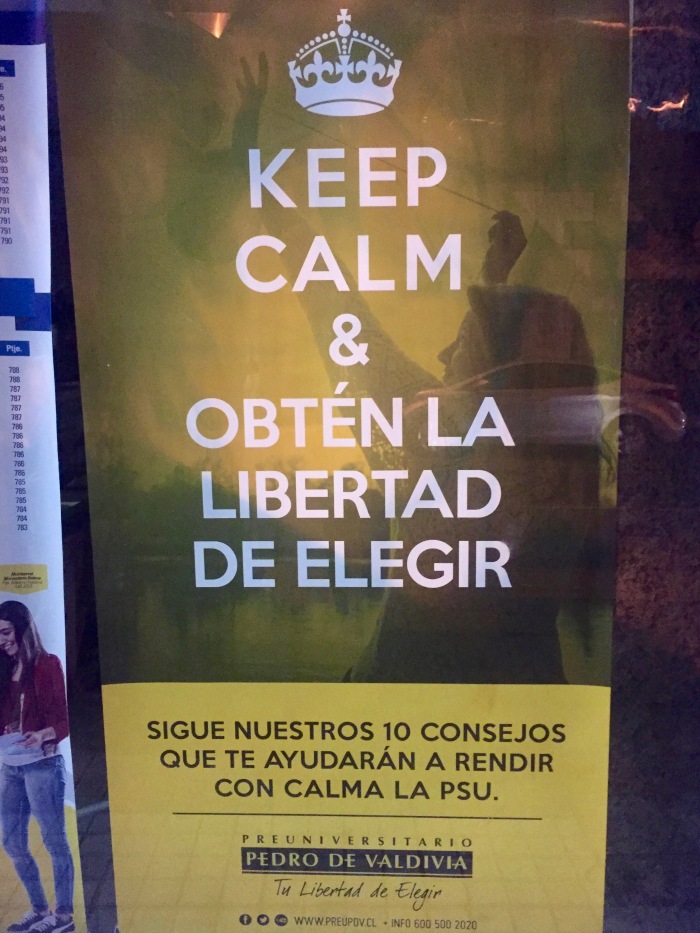 “Keep calm and obtain the freedom to choose.” 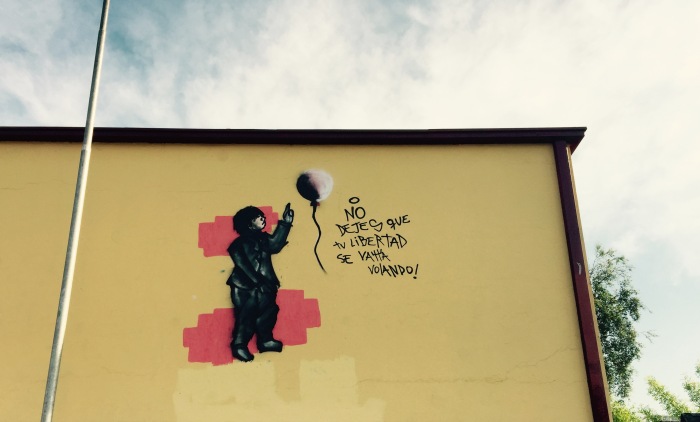 “Don’t let your freedom float away.”

It seems not. That’s why students are pushing back against the liberty to operate private schools in favor of a public education both funded and administered by the government.

Why keep calm when all good choices are too expensive and the right to education is disappearing before your eyes?

Daniel Bergerson is a full-time student teacher in the Barnard Education Program at Columbia University. He plans to teach high school social studies in his hometown of of Minneapolis, Minnesota. You can follow him on Twitter @DanielBergerson and read more on education, history, and campus politics at The Dandruff Report.